I am 34, and I’ve been riding for over 20 years, first doing hunters, and now dressage.  I’ve taken lessons and taught lessons, leased horses and trained horses, gave up riding and realized I could never really give up riding.  Now I have Liam and Remy, and lots of big goals.  I have trained Liam from his first day off the track to his first show, taken him on his first trail ride, and used him to calm other horses on their first trail ride.  I’ve gotten runaway with on him and bucked off of him, and I’ve used him to introduce newbies to the joy of horses and give them their first lesson.  For over 10 years now, he’s been my companion and my partner, through the good times and bad.

Liam is a 20 year old thoroughbred.  He raced until almost the end of his 8 year old year, earning $113,000 in 37 starts.  When he retired from racing, he became my project and my teacher.  He is athletic and opinionated, he loves to work, and he LOVES to run, but he has also learned that it is quite fun to explore miles of trail, giving everything a good sniff and most things a little nibble.  His favorite thing in the whole world is having his ears massaged, and his pet peeve is being brushed – he absolutely hates that!

Liam and I trained with Grand Prix dressage trainer Julie Julian at the Flying Dutchman Farm for 14 months.  I was Julie’s working student and assistant trainer.  Everyday I took a lesson with her, watched her ride and train and teach others, and then I trained my own horses and taught my own students.  It was a very busy schedule, but I learned so much!

Liam and I still do some dressage, but he’s also enjoying more trail riding these days.  He’s passed the torch to another ex-racer that I’m training and competing now as well, Remy. He’s a 17 hand, 9 year old gelding that only raced through his 4 year old year. He didn’t do much at the track, but he’s proving to be a delightful and educational dressage horse to train. Between his spectacular gaits and his sensitivity to his rider, he’s taken my riding to a whole new level. He’s thoroughly educated me in the arts of saddle fitting, bitting, and biomechanics. We’re currently schooling a pretty solid 3rd level, and starting to dabble into some 4th level work. I have high hopes for his boy! 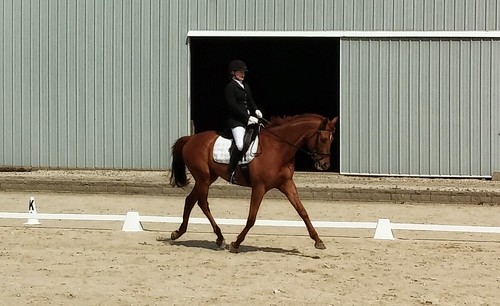 I have also been fortunate enough to have owned a few other horses as well, who have since gone on to new homes, as well as having had the opportunity to be a part of training horses for clients. Cava was a thoroughbred I owned and trained off the track:

Maddie was another ex-racer that a friend of mine had started retraining off the track, who then passed through a few owners and some unfortunate circumstances before ending up with me for a few months of retraining: 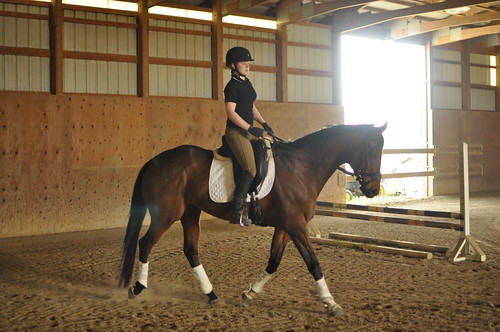 Austin was my first non-thoroughbred. A 10 year old paint, Austin had been a backyard trail horse until I came along. Although he was really quiet and broke, he didn’t have much formal training, and was totally clueless when it came to arena riding! He’s a smart boy though, and it didn’t take long to get him going well, and he soon started to impress me with his quick mind and sturdy body as he started to offer collected work and lateral work well beyond where he should have been in his education. His early years on the trails had taught him to coordinate his body and carry himself in a good balance and it didn’t take much for him to put the dressage pieces into place. He’s now owned and ridden by a student of mine. 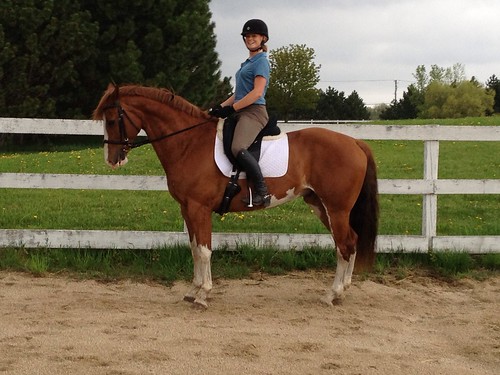 I want to share my experiences with you, the lessons I’ve learned, the exercises I will always go back to, and the progress  I make going forward.  I want my story to inspire and motivate others to give an ex-racehorse a chance, and to lay out a road map of what to expect.  Of course each horse is different, but if I can save you from even a few of my mistakes or give one more ex-racehorse a chance at a new career, it is worth my time writing this.  I also want to  keep track of my progress, both with my horses and with some of my students and training horses.  Sometimes it is easy to forget how far you’ve come when you are looking ahead at how far you have to go, but when you look back at where you were it puts everything in perspective!