Spring has sprung, and in many cases, the horses are doing likewise! I haven’t seen this level of exuberance from the herd in a long time! It’s finally warming up, and we are all more than ready. Now the horses come in bearing the ultimate signs of springs, thoroughly caked in mud, which, when curried, comes off as a fine dust amidst a shower of shedding hairs. After much time and effort, the horse looks as clean as a previously mud-caked horse can, and I find myself covered in that fine mud-dust and wearing a significant number of chestnut hairs. Never the less, I’m not complaining! In fact, I’m celebrating! 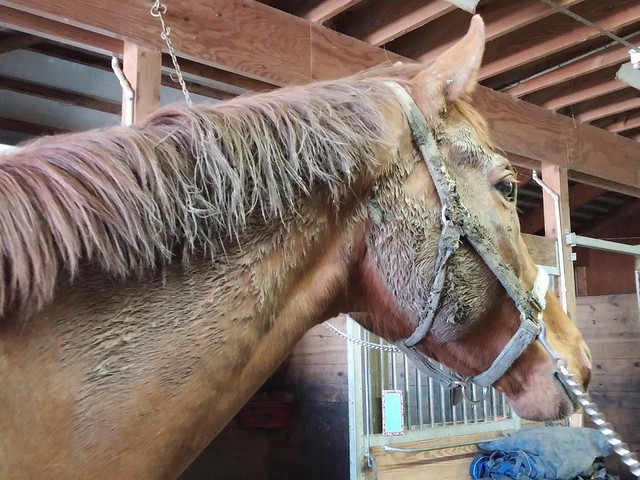 This past week looked really promising, with Liam getting his hock injections on Tuesday, and then the massage therapist coming out to work on both boys on Friday. They were feeling good and ready to go! Only I had gotten sick, and spent an entire beautiful, warm, sunshiny day sleeping, then a few more dragging with minimal energy and a stuffy nose. Then as my determination began to win out over my cold and I decided I’d get back in the saddle, I went to the barn only to find Liam had lost a shoe! So, all in all it was a pretty much wasted week as far as riding went.

On the plus side, the new saddle pad I ordered FINALLY arrived. It had been back ordered and the tack shop I ordered from had it drop shipped from the manufacturer so I’ve been waiting almost 3 weeks for it! But it’s here, and I did get a ride in on Remy early in the week to try it out. Fortunately he seems to think his saddle is still ok, it was his saddle pad that was getting too tight as he put some muscle back on. 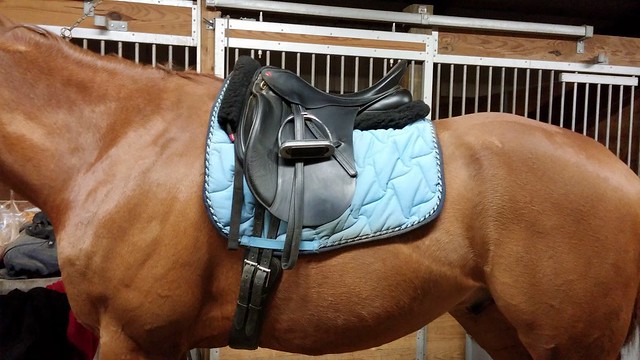 The lovely light blue pad is also new, but besides being pretty, it’s just a saddle pad. But the half pad is the one I was really excited about. It’s a Matrix pad, which contains inserts called Poron XRD, which is really thin material that absorbs 90% of impact. It’s like Thinline, only more affordable, and from my very short trial, even more comfortable.  Both horses seem to really like it, and on Remy’s big, springy trot, it’s a life saver for my body, and keeps his sensitive back much more relaxed, which further helps everything.  As he’s put the muscles back on, the pad I was using became too thick to fit comfortably under his saddle, which he told me with pinned ears and a hollow back when I asked him to trot. This pad adds cushion and impact absorption without making his saddle too tight, so I’m very relieved that, at least for the moment, we aren’t heading back through saddle fit hell. Happy horse, happy me!

So today Liam got his shoe back on, and I’m headed out soon to hopefully finally get us all back to a normal routine and some consistent work. I’m still breathing at about 50% due to my sniffles, and of course today is 35 degrees and cloudy/windy, but I’m determined! It feels like show season is really right around the corner now, and I’m so excited to get out and do some stuff after being cooped up in the indoor (when we could ride at all) for months. Seeing Liam’s improvement after his hock injections has refueled my goal to finish up my bronze medal on him, and do a western dressage test just for fun. I’m also hoping he can help me get some scores towards my silver. I want to take it slower with Remy, I feel like he has SO much potential and is finally starting to mature, but we both have a lot of strength to get back before things will feel comfortable and look beautiful. I also want to focus on travelling with him, just little field trips, and getting him more relaxed about that routine, so that there is a little less stress and nerves for both of us when we show. Then, I’m hoping to get some really good scores with him, and work towards some year end awards!

2 thoughts on “Spring is in the Air”